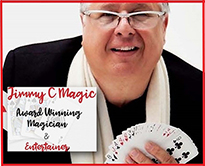 Jimmy C is a 5-Star Google rated entertainer and an award-winning Magician! His close-up performances astound audiences of all ages. While currently residing in Florida, he was born and raised in Rochester, New York. He has entertained throughout the world! ... No matter the occasion, Jimmy C Magic always brings a quality level of entertainment to make any party everything it can be. Read more....

If you are traveling by air, have a food allergy and are at risk of anaphylaxis just how safe are you flying on an airliner? While in-flight medical emergencies are rare, the FAA requires airlines be prepared. Shiv Sudhakar reports that a surgical oncologist assisting in an in-flight emergency found issues with an airline’s preparation. Lianne Mandelbaum, founder of No Nut Traveler, explains how airlines should be prepared to assist their food allergic passengers.

Find out what the doctor found and to keep you & your safe on a flight.

Dr. Andrea Merrill, a surgical oncologist in Boston, is raising awareness about the need for better airline emergency medical kits after a tweet of hers went viral recently.

She helped out on an in-flight emergency this summer — and learned a great deal.

Now, she's speaking out and hoping others step up to provide better equipment on board flights. Already, there has been response.

Did you know that sesame is an ingredient in all kinds of processed food products?
It’s also one of the leading causes of dangerous food allergy reactions.
In 2023 the federal government will designate sesame as the ninth food allergen.

12 Foods to Avoid if You Have a Sesame Allergy

When we think of allergies, we tend to cast our minds toward a few usual suspects: Pollen causing hay fever symptoms, animal fur making your eyes water, and potentially dangerous bee stings. But food allergies are also widespread, and amongst the more well-known food allergy triggers like nuts, wheat, and milk, there are a few allergens that are on the rise.

Sesame is one such trigger. Once a lesser-seen allergy, sesame allergies have become way more widespread in the last few decades, and they now affect over 0.2% of U.S. adults and children, according to Food Allergy Research & Education. The allergy has become so widespread that beginning on January 1, 2023, it will be a requirement to label sesame as a potentially triggering ingredient on food packaging, as a major allergen.

Our friend Dave Bloom of SnackSafely.com has released the always anticipated updated list of safe food allergy and snack recommendations for the school year.

Whether you’re sad the summer is coming to an end or dancing in the street now that the kids are headed back to school, there’s still the matter of what to pack for lunch and snack time if they have food allergies or attend allergen-restricted schools or classrooms.

That’s where we come in. For more than a decade, our allergy-friendly food guides have been used by thousands of schools and tens of thousands of families nationwide to help keep allergens out of the classroom and the home.