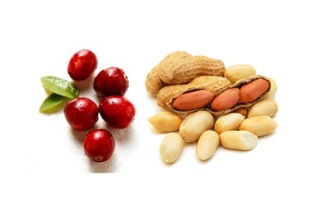 Researchers at the University of Texas Southwestern Medical Center and North Carolina State University combined peanut flour with polyphenol-rich foods such as elderberry, blackcurrant, cranberry, green tea, cinnamon, grapes, and chokeberry, and found they helped to block allergic reactions to peanuts. Read all about it here.

Peanut allergies strike fear in parents, leading airlines to stop handing out peanut snacks and principals to institute school-wide bans on the legumes. But some researchers hope the war on peanuts can end in a truce. One team has combined peanut flour with polyphenol-rich foods to create an edible product that lessens allergic reactions in mice. Such a product might one day help people with allergies develop a tolerance for peanuts (J. Agric. Food Chem. 2014, DOI: 10.1021/jf405773b).

The culprits behind these troubling allergic reactions are certain peanut proteins. In people with peanut allergies, mast cells and basophils, two types of immune cells, display versions of immunoglobulin E (IgE) that bind to specific bits of the proteins. This sets off a chain reaction that releases a host of inflammatory molecules, triggering the shortness of breath, swelling, and other potentially life-threatening symptoms of an allergic reaction.

One promising approach to dampening peanut allergies is giving allergic individuals small oral doses of peanut flour in hopes that they’ll build up a tolerance. Unfortunately, oral immunotherapy itself can unleash an allergic response. Some researchers have reported that eating foods rich in polyphenols alongside peanuts can mute this response, possibly because the polyphenols bind to and hide the parts of the peanut proteins that IgE recognizes (Clin. Exp. Allergy 2011, DOI: 10.1111/j.1365-2222.2011.03773.x). Mary Ann Lila of North Carolina State University hypothesized that a substance combining peanut flour and polyphenols could help people develop peanut tolerance without triggering an allergic response.

To make such a combination, Lila and her team immersed peanut flour in solutions containing juices or extracts from polyphenol-rich foods, such as elderberry, blackcurrant, cranberry, green tea, cinnamon, grapes, and chokeberry. Then they freeze-dried the suspensions, leaving behind a series of colorful powders. To determine how the polyphenols bound the peanut proteins, the researchers compared infrared spectra of the protein regions recognized by IgE before and after polyphenol enrichment. The team observed large changes in the combination with cranberry juice, so they decided to further test the cranberry-peanut flour.

To see whether IgE still recognized the peanut proteins, the researchers added cranberry-peanut flour to cell cultures containing basophils primed to release molecules that would trigger an immune response. As hoped, the modified peanut flour triggered fewer releases than the unmodified flour.

In another experiment, the group fed cranberry-peanut flour to mice that had been sensitized to peanuts. These mice had 75% lower levels of a biomarker for the release of molecules that start an allergic reaction than in animals fed regular peanut flour, suggesting that the treatment made the peanut flour more hypoallergenic.

Although the results are exciting, says J. Andrew Bird of the University of Texas Southwestern Medical Center, “it’s very early to make broad leaps.” He thinks the big test will be determining the flour’s effects in patients in the clinic. Lila says her team first is going to extend their approach to different food allergies, creating hypoallergenic food combinations for eggs and milk.

By Anslee Wolfe Special to The Colorado Springs Gazette

After a close call with a severe allergic reaction to fish, 18 year old Morgan Smith and his family have worked tirelessly to implement guidelines in their local schools to help students with severe food allergies. That led to a statewide movement and the passing of a Senate bill in 2009 that requires all Colorado school districts to have a plan to manage allergies.

At 10 years old, Morgan Smith ate some fish that could have killed him.

But he didn't know he was allergic to fish. He had tested negative to the allergy.

He was camping with his father and sister when he ate trout and had a reaction within minutes. He ended up in an emergency room in anaphylactic shock.

That was the only time Smith has needed an EpiPen, an emergency medication used to treat severe allergic reactions. Still, he always carries two, along with Benadryl allergy tablets.

"They don't leave my person," Smith said. "I don't keep them in my backpack in case it gets lost."

Smith, 18, has learned a way of life that includes always checking ingredients and checking packages to see if food has been prepared at a facility that contains nuts, because even that isn't safe.

"Some people think not being able to eat PB&J sandwiches may have been a loss to my childhood," he said. "But I've learned it is the things we don't have, and may want, that teach us the most about how to live a happy and productive life."

Smith and his family have been a driving force in raising awareness about the dangers of food allergies. His mother started the website AllergicChild.com, where Smith has been a columnist since age 9.

Smith and his mom helped spearhead an effort in Academy School District 20 that put in place safety guidelines to help students with severe food allergies. That led to a statewide movement and the passing of a Senate bill in 2009 that requires all Colorado school districts to have a plan to manage allergies.

"No cure for food allergies have been procured. There have been some promising starts with various treatments to desensitize the immune system to food allergies, but they are at the very start," he said. "Until a cure has been fully tested and is in widespread use, food-allergic children like me can only work to create a more aware community."

Read all about our recent legislative action event in Albany, and the legislators who are in support of our cause.  As Assemblyman Felix Ortiz, (D-Assembly District 51) said, “This not a Democratic or Republican issue; this is a human issue and our children deserve the best. We need to get this done!”

The Allergy Advocacy Association participated in a legislative action event in Albany on Tuesday, May 6th. The overall theme of our event was:

We set up our exhibit booth in the capitol concourse early in the day and passed out allergy and asthma information to many passers-by.  Among the legislators who paid us a visit were Assemblymen Steve Hawley (Assembly District 139), Ray Walter (Assembly District 146) and Senator Jose M. Serrano (Senate District 29).

There was a morning media event at the Legislative Office Building to support NYS A7791 sponsored by Assemblyman Tom Abinanti.  The bill authorizes school nurses to possess and administer auto-injectable epinephrine without a prescription in the event of an emergency, and authorizes schools to provide and maintain epinephrine auto-injectors on school property.  It is also known as the ‘nurse authorized stock epi’ bill.  Abinanti is a Democratic Assemblyman representing New York’s District 92, who knows firsthand the importance of having an Epi-PenTM at the ready during an emergency anaphylactic reaction.  “I have a 14-year-old son with autism and it turns out he has severe food allergies,” says Abinanti.  “Given my personal story with my son I immediately realized we should have Epi-PensTM available for as many kids as possible in schools,” he says.  “Hopefully my bill will come out of the health committees shortly and be voted into law.”

The assemblyman and a half-dozen of his colleagues from both political parties urged both houses of the legislature to pass bills improving access to epinephrine in NYS schools.  “This not a democratic or republican issue; this is a human issue and our children deserve the best,” said Assemblyman Felix Ortiz, (D-Assembly District 51).  “We need to get this done!”  The assemblyman is the principle assembly sponsor of A2566 that authorizes students to carry prescribed auto-injectable epinephrine in NYS schools.

Another notable sponsor of A7791 is Assemblyman Bill Nojay, from Lakeville, NY Assembly District 133.  He was very nearly a victim of anaphylaxis.  “Ten years ago I took ampicillin and nearly suffered asphyxiation.  The volunteer ambulance service EMTs administered epinephrine and saved my life,” said Nojay.  In addition to supporting Tom’s bill, Mr. Nojay is now a volunteer with the same ambulance service in his district.

Other quotes from lawmakers:

“This bill isn't a mandate; it simply gives school districts the option to stock the medication.”

”In Albany, too many times we have too much dysfunction; it is nice when we get a bill that is a common sense bill we can support with a bipartisan effort.”

“Protect our children; get this bill passed this year; don't put our kids at any further risk!”

During Tuesday afternoon we attended meetings with many lawmakers to discuss all bills currently pending in the legislature intended to help protect the lives of children afflicted with life-threatening allergies.   On Thursday, May 8, NYS Senator Kemp Hannon (R, C, IP) 6th Senate District, chairman of the Senate Health Committee, agreed to sponsor the NASE bill.  His committee is currently revising the language of Tom’s bill into NYS Senate bill S7262.

Our association hopes that this will be the year to finally get legislation passed in NY to improve access to epinephrine in all school districts large or small, rural or urban.

To find one’s NY State Senator and contact information, fill out the box in the top left corner on the following Web page:
http://www.nysenate.gov/senators

Send copies of all correspondence related to NYS bill A07791 to Assemblyman Abinanti at LOB 631, Albany, NY 12248.

*Excelsior is a Latin adjective meaning "higher" or "loftier", used in English as an interjection with a poetic meaning of "ever upward."  It is the state motto for New York.