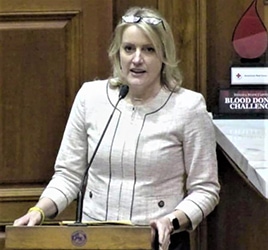 We know that anaphylaxis, the life-threatening allergic reaction, can be successfully treated with an epinephrine auto-injector (EAI). Without an EAI, the results are often tragic. Many families that have experienced this tragedy are working to promote awareness of anaphylaxis and the need for improved access to EAIs....   Read the article here.

Most of us think of food or bee stings as the leading cause of allergy-related sudden deaths in the U.S. But a recent analysis of death certificates found it was actually medications that were the cause, particularly among older people and African Americans.

Medications: The Leading Cause Of Allergy-Related Deaths

An analysis of death certificates from 1999 to 2010 has found that medications are the leading cause of allergy-related sudden deaths in the U.S. The study in the Journal of Allergy and Clinical Immunology also found that the risk of fatal drug-induced allergic reactions was particularly high among older people and African-Americans and that such deaths increased significantly in the U.S. in recent years.

Anaphylaxis is the term used for a severe, potentially life-threatening allergic reaction that can occur within seconds or minutes following exposure to an allergen. Until now, data on trends in anaphylactic deaths—or even the number of yearly deaths from anaphylactic shock—has not been well-defined. One reason: unlike countries such as the UK, the U.S. doesn't maintain a national registry for anaphylaxis deaths.

"Anaphylaxis-related deaths in the U.S. have not been well understood in recent years," said Elina Jerschow, M.D., M.Sc. director, Drug Allergy Center, Allergy and Immunology Division of Medicine, Montefiore Medical Center, and assistant professor of medicine, Albert Einstein College, the lead author of the study. "We hope these findings will help in identifying specific risk factors and allow physicians to formulate preventative approaches."

Further analyses revealed fatal anaphylaxis due to medications, food and unspecified allergens was significantly associated with African American race and older age; and fatal anaphylaxis rates due to venom was more common in white, older men.

Of the 2,458 deaths identified between 1999-2010, culprit drugs were not specified in most of the cases (approximately 74 percent). However, among those with an identified culprit drug, nearly half were antibiotics, followed by radio-contrast agents used during diagnostic imaging procedures and chemotherapeutics that are used in treatment of cancer.

"Anaphylaxis has been dubbed 'the latest allergy epidemic,'" said Dr. Jerschow. "The U.S. and Australia have some of the highest rates of severe anaphylaxis among developed countries. We hope these results bring increased awareness of the need for a better understanding of anaphylaxis deaths."