She was the most caring and selfless person I know

"She was the most caring and selfless person I know.”

It’s always tragic when we lose someone to a severe allergic reaction no matter how many precautions were taken throughout his or her life. Read about the family and friends of Ashley Frangella, who died five years ago, and how they continue to work tirelessly to raise awareness and money in her honor through Ashley’s Hope for Allergy Awareness (AHAA).

Family Raises Awareness and Funds in Memory of Ashley Frangella

Although she passed away almost five years ago at the age of 20, Ashley Frangella was, is and always will be surrounded by love.

She was surrounded by love in life as her parents, Frank and Cathee, scoured the limited information they could get their hands on back in the days before facts were so readily available and allergies so commonplace. She was surrounded by the love of her siblings, Dina and Ryan, who helped to keep her safe with watchful eyes, and Kaitlin and Nicholas who learned to read by studying food labels for anything Ashley was allergic to as well as a brother-in-law, Tony, who treated her as his own little sister. She was surrounded by an extended family larger than life as well. Even at school she was surrounded by love from her teachers and administrators who watched out for her and created a safe place she could eat lunch with her friends and feel included.

Today that love has had to take on a different form but is no less powerful as her family and friends work tirelessly to raise awareness and money in her honor through Ashley’s Hope for Allergy Awareness (AHAA) —a name her mother Cathee Frangella says was chosen for its meaningful acronym of an Ah-Ha! moment; and certainly a family event and true expression of love by family and friends alike.

Described by Ashley’s friends and family as “young, smart, pretty, kind, caring, sensitive, energetic, deeply responsible and spiritual, with a smile to light up a room,” Ashley was any parent’s dream. During her teen years she worked as a children’s party hostess where her knack for working with kids really shone through. After graduating from high school she attended Baruch College in New York City where she studied accounting and worked in retail part-time.

Life for Ashley, however, was rarely easy. As a baby she refused the numerous different formulas (both milk- and soy-based) suggested by the doctor. At the time everyone struggled to understand why but in retrospect Cathee believes her body knew they were harmful to her. It wasn’t until her first true reaction with yogurt, complete with an asthmatic cough, gasping for breath and a trip to the emergency room, that the family learned she had a severe allergy to milk. (She had asthma as well.)

Even after receiving this diagnosis Ashley couldn’t fully appreciate what it really meant or how her life would change. Twenty-plus years ago allergies weren’t as common as they are now and information was hard to find. A diagnosis like that could stagnate even the strongest of individuals. Yet Ashley adjusted and with her family persevered, finding support where they could and learning along the way. The times changed too as allergy-information on food labels became commonplace and more people knew about allergies and how serious they could be.

Through the years Ashley thrived academically and socially first in her public elementary school with a 1:1 health paraprofessional and later in a Catholic middle school that was smaller than the public school and therefore offered less chance of accidental milk exposure.

Some kids would have chafed against the limitations put on them by their allergies but Ashley accepted it and even worked hard not only to educate those around her but to make everyone feel comfortable.

“Through it all, Ashley had a very strong positive attitude,” her mother remembers. “She knew of the severity of her allergies and she shared her knowledge with anyone who wanted to know about allergies, but she also tried to make you feel that she was just like everyone else. The sacrifices she made so that you would not be off-put by her limitations were amazing. She was the most caring and selfless person I know.”

Despite always doing her very best to stay safe and be prepared, Ashley had a severe allergic reaction during lunch while at work on November 26, 2010. She passed away a few days later on December 1, 2010. Her mother says they still don’t know the specific details of what happened that day and never will.

Desperate to find meaning in their loss, the family chose to move forward through their grief and continue Ashley’s work to increase the awareness of severe allergies and anaphylaxis. Through Ashley’s Hope for Allergy Awareness they organize a benefit every May to coincide with Ashley’s birthday and—coincidentally or not—Food Allergy Awareness Week. With drinks, dinner, dancing and raffles not only has it proven to be a special way to remember Ashley and keep her legacy alive but it has raised nearly $100,000 for food allergy awareness and education (Additionally, their family and friends fundraise for the FARE Walk each year).

Cathee hopes sharing Ashley’s story will help others living with severe allergies and encourages anyone in this situation to get educated and find support. Especially parents and caretakers.

“There are so many things that we are not in charge of,” she says. “We cannot be with our children 24 hours a day. And keeping them safe is not just us, it includes our families, our schools and it doesn’t end there; it includes our work places. Measures, protocol and federal regulations and laws have to be put in place for these children who are diagnosed, not with a disability but with a fragile position in this world that makes them extremely vulnerable and susceptible to dangers in our everyday world, in order to assure their safety in everyday tasks that the general public does not face.”

Her advice is to stay strong, be forceful, go with your gut and arm yourself with knowledge. Also, get a community behind you. Whether it’s finding a support group to join and exchange information with or getting active with an advocacy group (or both!) there is power in numbers and peace of mind in knowing you’re not alone.

To learn more about Ashley’s Hope for Allergy Awareness visit their Facebook page. 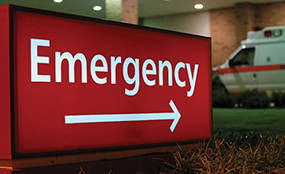 A recent study proves once again how important it is to receive medical treatment after a severe allergic reaction. Many times there is a second, delayed reaction that can be deadly. There are risk factors of who might be susceptible to a second reaction, but it’s always wise to play it safe and get to the emergency room just in case. Read all the details here.

A new study by Ontario, Canada researchers suggests about 15 per cent of children who have a severe allergic reaction that involves anaphylaxis can actually have a second reaction hours after the first. It warns that doctors and parents should be on the lookout for this type of two-stage or biphasic anaphylactic reaction.

Some predictors of who might develop biphasic anaphylaxis include children aged six to nine, children who needed more than one dose of epinephrine to control their reaction and children who were delayed in getting treatment initially.

Adults can also have biphasic anaphylactic reactions but this study looked only at children with the condition. The study is the largest ever to look at biphasic anaphylaxis; it is published in the journal Annals of Allergy, Asthma and Immunology.

Led by researchers from the Children's Hospital of Eastern Ontario, it looked at the records of 484 children who were treated for anaphylaxis at CHEO or at the Hospital for Sick Children in Toronto.

The goal was to try to figure out how common biphasic reactions were and if there were ways to predict which children were at the highest risk of having a second delayed reaction.

"The key message is ... treat an allergic reaction with epinephrine and treat it early," says Dr. Waleed Alqurashi, the first author of the paper. "And after that, seek help. That's the key message for parents."

Anaphylaxis is an acute allergic reaction, often associated with consumption of trigger foods — such as peanuts or shellfish — or by things like bee stings. People who have allergies that can induce anaphylaxis are supposed to carry Epi-Pens — epinephrine — to counteract the reaction. Anaphylaxis can lead to shock and closing of the airways and can be fatal.

Of the cases Alqurashi and his co-authors studied, 71 or 15 per cent had a second delayed reaction. Three-quarters of the delayed reactions occurred within six hours of the original reaction. Alqurashi said children who had an initial severe reaction should remain in the emergency department under observation for some hours to ensure early treatment if they have a delayed second reaction.

Conversely kids who had mild reactions and were treated early can probably go home sooner, he said. Alqurashi suggested doctors use the prediction factors in the study with caution, noting the findings need to be validated with another study. He and his colleagues are currently working on one that records and follows cases prospectively — as they arrive for care — rather than retrospectively from files. Prospective studies are considered a stronger form of evidence.

"As with anything in medicine, you cannot adopt practice based on one single piece of evidence.... Especially for prediction rules — they have to be really robustly validated," he said.

DBV Technologies presented clinical data on the company’s VIPES study, a Phase 2b trial for the treatment of peanut allergy using Viaskin® Peanut (also known as “the peanut patch”). Drs. Christophe Dupont of Necker Hospital in Paris and Hugh Sampson, director of the Jaffe Food Allergy Institute at the Icahn School of Medicine at Mount Sinai, presented new results that continue to support the effectiveness and safety of the peanut patch.

New analyses show that 50 percent of children were able to achieve a dose of at least 300 mg of peanut protein after 12 months of treatment versus 12.9 percent in the placebo arm. According to Dupont, the threshold dose of 300 mg peanut protein is clinically relevant, as reaching this level significantly reduces the risk of allergic reactions against potential peanut traces in foods. The company remains on track to start its Phase 3 trial in peanut allergic children, the PEPITES (Peanut EPIT Efficacy and Safety study) study, in late 2015.

Dr. A. Wesley Burks, chair of the Department of Pediatrics at the University of North Carolina-Chapel Hill, presented these data at the EAACI meeting on June 8. “These results suggest that AR101 has the potential to become the first approved oral desensitization therapy for peanut allergy, a serious and growing health problem that affects more than 5 million people in the United States and Europe, including more than two million children,” Burks said.