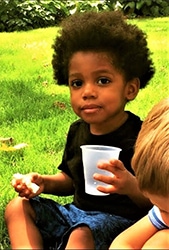 The parents of three-year-old Elijah-Alavi were devasted by the loss of their son. While at preschool, Elijah, who had food allergies including dairy, was mistakenly given a grilled cheese sandwich. He suffered a fatal attack of anaphylaxis. From that tragedy Elijah’s parents embarked on a path of advocacy and education, so that other parents wouldn’t have to experience the same heartbreak. They founded the Elijah-Alavi Foundation, which includes “Elijah's Echo,” an initiative raising awareness of food allergies and anaphylaxis.    Read the article here.

On September 29th, New York State Governor Andrew Cuomo signed the Emergency Allergy Treatment Act into law.   Many thanks to Tom Abinanti (NYS Assembly-D) and Kemp Hannon (NYS Senate-R) for the leadership in getting this important piece of legislation passed.

With the enactment of EATA New York is now actively participating in a very positive public health initiative that is trending all across America.  Since 2013 over half the states in our country have taken legislative action to improve public access to EAI devices.   Twenty-nine states have already passed laws authorizing “entity stocking” of epinephrine in case of anaphylaxis emergencies.  Those states include California, Colorado, Florida, Illinois, Michigan, North Carolina, Ohio and Wisconsin.  The provisions in the NYS law are very similar to laws passed other states.

When dealing with an anaphylaxis emergency, failure is not an option. Now that EATA has been enacted, it is my opinion that the lives of countless individuals with life-threatening allergies will be better protected here in NYS.

For more details on this law, read more here.