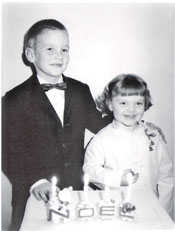 My name is Jon Terry and I founded the Allergy Advocacy Association in 2010 to honor the memory of my sister Ruth T. Cornell. (Here we are all dressed up as kids.)

Like many people Ruthie didn’t even know she was allergic to honey bees.  In fact, she had been a beekeeper with hives in her yard for more than seven years without incident when she was stung while working in her garden in August 2009.  After feeling dizzy and fainting an ambulance was called and she was taken to the emergency room as a precaution. Given the extreme North Carolina heat and humidity doctors believed she had a significant case of dehydration.  As she had never had an attack of anaphylaxis before despite being stung no one thought the bee sting to be serious.

As is common with anaphylaxis it is not the first exposure that causes a life-threatening reaction but a subsequent encounter with the allergen.  This was Ruthie’s experience as well.  In her case, about a month after the first sting another honey bee managed to get into her bedroom early one morning and stung her. She stopped breathing almost immediately.  After being in a coma for a few days Ruthie died on September 23, 2009.

Like so many others who have died from anaphylaxis her life was cut short way too soon.  As members of her loving family, we have struggled to find meaning in her death as a way to honor the life she lived.  Yet we also want to remember she was so much more than the way she died.  Ruthie was a warm, generous person with many interests and talents including music (she played the traditional Irish fiddle, tin whistle, bodhran and piano), gardening, knitting, sewing and cooking.  She also taught piano and was involved in a music ministry for many years. 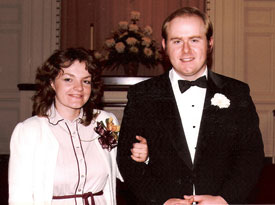 It was her family, however, that was her highest priority and she was a loving wife, mother and sister.  She is survived by her husband Dr. Dave Cornell (pictured here with Ruth), three children Susannah, Nathan and Tian and a grandson Alecksandr as well as two sisters-in-law, a nephew and many aunts, uncles, and cousins.

We hope that through our not-for-profit organization we can help inform and educate people to prevent future tragedies like Ruthie’s.