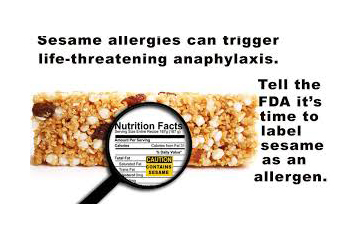 There is still time to add you voice to the effort to add Sesame as the 9th allergen on food labels. The FDA has extended the time for comments. Find out how to add your voice here.

John Lee, MD, Director of the Food Allergy Program at Boston Children’s Hospital, gives us a detailed report on several new ways to administer epinephrine that are in development. Many people choose a method based on cost and what insurance will cover, but soon we will have many more options that have longer shelf lives and are easy to use. (“What’s in your wallet?”) We also offer an update on the peanut patch as a possible prevention method. You can read all the details here.

From prefilled syringes in the 1960s to the advent of auto-injectors in 1980, epinephrine and its treatment for anaphylaxis has come a long way--but that doesn’t mean researchers are resting on their laurels. Not only are they busy exploring possible new innovations they are even making old ideas new again.

Currently three options exist on the market and all come in the same .15 mg and .3 mg dosing amounts: Mylan’s EpiPen, Adrenaclick and its generic version Epinephrine Injection USP. (A fourth epinephrine auto-injector, Sanofi’s Auvi-Q, was recalled in the fall of 2015 due to the potential for inaccurate dosage delivery.)

According to John Lee, MD, Clinical Director of the Food Allergy Program at Boston Children’s Hospital, some people may choose one of the presently available options over another due to personal preference. However, the choice often comes down to what is covered by insurance companies and/or what people are most familiar with.

This makes sense since they all contain the same medication.

However, this may not be the case for long as researchers are working on a variety of new options including some that are quite different. For example:

Innovation in epinephrine auto-injectors is important as it can lead to improvements ranging from a more convenient size and better temperature stability to a longer shelf life and lower cost, with the latter being of particular concern to families according to Dr. Lee. It is not without its challenges, however, as the greater number of devices on the market can lead to confusion and difficulty for school nurses and others who take care of multiple kids who have different epinephrine devices.

Fortunately researchers are exploring other areas that could eventually result in less need overall for epinephrine auto-injectors.

One example is DBV Technologies’ Viaskin Peanut (aka the “Peanut Patch”). Based on the concept that absorbing small amounts of peanuts through the skin can induce tolerance in children, so far the results look promising. “The idea for this patch is not so children can eat peanuts on a regular basis but rather to protect them from an allergic reaction if they have an accidental exposure to peanuts,” says Dr. Lee.

In study findings released so far children ages 6 to 11 had the best results. After one year of wearing a patch continuously (replaced daily) that contained 250 micrograms of peanuts (the equivalent to about 1/100th of a peanut) 50 percent of children were able to increase their tolerance to peanuts to 1000 mg of peanut protein (about 4 peanuts) or ten fold increase in their tolerance compared to the start of the study. After two years 80% of children reached this level of tolerance. Side effects were mild and no children had an anaphylactic reaction.

Clearly researchers have much more to learn in terms of how long the patch needs to be worn, what happens to tolerance levels if wearing stops, etc. Enrollment is going on now for a phase III trial which should take about two years. Data will then be submitted to the FDA in hopes of getting it approved as a commercially available product that can be prescribed by doctors and allergy clinics.

Another area of interest is the microbiome and the idea that bacteria in one’s gut could affect the development of allergies and asthma. Researchers are currently working to learn more about this complex environment.

Finally, avoidance of allergens is critical to preventing an anaphylactic reaction. However, when eating away from home it’s sometimes difficult to know for sure what ingredients different dishes may contain. Enter the Allergy Amulet, a device currently being developed for people with peanut allergies (and hoping to ultimately expand to include other allergens as well). As envisioned, people with allergies would buy disposable strips that they could then touch to the food and insert into an amulet-type device worn on a necklace or bracelet or stored in a pocket. If the food contains the allergen, a sensor on the amulet would buzz, beep or light up.

Exciting possibilities are on the horizon for the treatment of anaphylaxis. In the meantime, education is important for everyone who interacts with severely allergic individuals. Toward that end Dr. Lee is the co-founder of AllergyHome, a website that offers crucial information for families, schools and healthcare providers including a free training module that has been used 40,000 to 50,000 times across the U.S. in the last year to help train school staff about the dangers of allergies and allergic reactions.