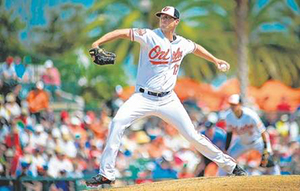 Matusz gets a scare; pitcher suffers serious allergic reaction and ends up in hospital

SARASOTA â The Baltimore Orioles and Brian Matusz survived a major scare that entailed a call home to mom and a trip to Sarasota Memorial Hospital.

After Sunday's game against the Pittsburgh Pirates, the southpaw relief pitcher went out to dinner and ordered an Asian dish that he didn't realize had been cooked in peanut oil.

Matusz, 27, soon experienced what he described as "the worst allergic reaction" he has ever had. He gave himself a shot of epinephrine that he always has with him, and a Benadryl, but it didn't get the job done this time around.

"It was definitely scary," Matusz said Tuesday before pitching two innings of relief in a 6-5 loss to a split-squad of Boston Red Sox in front of 7,647 fans for the second sold-out game of the spring at Ed Smith Stadium. "I called my mom and she told me to try to get to a hospital."

Matusz made it to Sarasota Memorial where the staff immediately placed him on intravenous fluids to try to rid his system of the peanut oil. Matusz then suffered another allergic reaction, along with an asthma attack, while he was in the hospital's care.

"When that shot (the one he gave himself) wore off, the peanut was still in my system," Matusz said. "Fortunately, I was in a good place. Everyone at Sarasota Memorial did a great job. I was fortunate to get through it."

The allergic attacks are getting nastier as he gets older.

"I've had them as long as I can remember," the soft-spoken Matusz said. "It's something I've had ever since I was a little kid. The attacks continue to get worse as I get older. The more times it occurs the worse it gets.

After resting and feeling tired on Monday, Matusz was able to retire all six batters he faced and struck out three Tuesday as he continues to prepare for another season in Baltimore's bullpen.

"It got a little scary," Orioles veteran manager Buck Showalter said. "You don't realize how much peanuts are in everything. And when you have an allergic reaction like that it can scare the hell out of you."