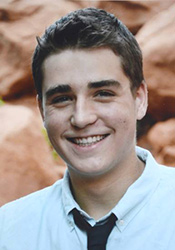 By Anslee Wolfe Special to The Colorado Springs Gazette

After a close call with a severe allergic reaction to fish, 18 year old Morgan Smith and his family have worked tirelessly to implement guidelines in their local schools to help students with severe food allergies. That led to a statewide movement and the passing of a Senate bill in 2009 that requires all Colorado school districts to have a plan to manage allergies.

At 10 years old, Morgan Smith ate some fish that could have killed him.

But he didn't know he was allergic to fish. He had tested negative to the allergy.

He was camping with his father and sister when he ate trout and had a reaction within minutes. He ended up in an emergency room in anaphylactic shock.

That was the only time Smith has needed an EpiPen, an emergency medication used to treat severe allergic reactions. Still, he always carries two, along with Benadryl allergy tablets.

"They don't leave my person," Smith said. "I don't keep them in my backpack in case it gets lost."

Smith, 18, has learned a way of life that includes always checking ingredients and checking packages to see if food has been prepared at a facility that contains nuts, because even that isn't safe.

"Some people think not being able to eat PB&J sandwiches may have been a loss to my childhood," he said. "But I've learned it is the things we don't have, and may want, that teach us the most about how to live a happy and productive life."

Smith and his family have been a driving force in raising awareness about the dangers of food allergies. His mother started the website AllergicChild.com, where Smith has been a columnist since age 9.

Smith and his mom helped spearhead an effort in Academy School District 20 that put in place safety guidelines to help students with severe food allergies. That led to a statewide movement and the passing of a Senate bill in 2009 that requires all Colorado school districts to have a plan to manage allergies.

"No cure for food allergies have been procured. There have been some promising starts with various treatments to desensitize the immune system to food allergies, but they are at the very start," he said. "Until a cure has been fully tested and is in widespread use, food-allergic children like me can only work to create a more aware community."