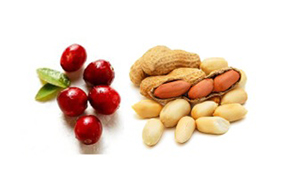 Researchers at the University of Texas Southwestern Medical Center and North Carolina State University combined peanut flour with polyphenol-rich foods such as elderberry, blackcurrant, cranberry, green tea, cinnamon, grapes, and chokeberry, and found they helped to block allergic reactions to peanuts. Read all about it here.

Peanut allergies strike fear in parents, leading airlines to stop handing out peanut snacks and principals to institute school-wide bans on the legumes. But some researchers hope the war on peanuts can end in a truce. One team has combined peanut flour with polyphenol-rich foods to create an edible product that lessens allergic reactions in mice. Such a product might one day help people with allergies develop a tolerance for peanuts (J. Agric. Food Chem. 2014, DOI: 10.1021/jf405773b).

The culprits behind these troubling allergic reactions are certain peanut proteins. In people with peanut allergies, mast cells and basophils, two types of immune cells, display versions of immunoglobulin E (IgE) that bind to specific bits of the proteins. This sets off a chain reaction that releases a host of inflammatory molecules, triggering the shortness of breath, swelling, and other potentially life-threatening symptoms of an allergic reaction.

One promising approach to dampening peanut allergies is giving allergic individuals small oral doses of peanut flour in hopes that they’ll build up a tolerance. Unfortunately, oral immunotherapy itself can unleash an allergic response. Some researchers have reported that eating foods rich in polyphenols alongside peanuts can mute this response, possibly because the polyphenols bind to and hide the parts of the peanut proteins that IgE recognizes (Clin. Exp. Allergy 2011, DOI: 10.1111/j.1365-2222.2011.03773.x). Mary Ann Lila of North Carolina State University hypothesized that a substance combining peanut flour and polyphenols could help people develop peanut tolerance without triggering an allergic response.

To make such a combination, Lila and her team immersed peanut flour in solutions containing juices or extracts from polyphenol-rich foods, such as elderberry, blackcurrant, cranberry, green tea, cinnamon, grapes, and chokeberry. Then they freeze-dried the suspensions, leaving behind a series of colorful powders. To determine how the polyphenols bound the peanut proteins, the researchers compared infrared spectra of the protein regions recognized by IgE before and after polyphenol enrichment. The team observed large changes in the combination with cranberry juice, so they decided to further test the cranberry-peanut flour.

To see whether IgE still recognized the peanut proteins, the researchers added cranberry-peanut flour to cell cultures containing basophils primed to release molecules that would trigger an immune response. As hoped, the modified peanut flour triggered fewer releases than the unmodified flour.

In another experiment, the group fed cranberry-peanut flour to mice that had been sensitized to peanuts. These mice had 75% lower levels of a biomarker for the release of molecules that start an allergic reaction than in animals fed regular peanut flour, suggesting that the treatment made the peanut flour more hypoallergenic.

Although the results are exciting, says J. Andrew Bird of the University of Texas Southwestern Medical Center, “it’s very early to make broad leaps.” He thinks the big test will be determining the flour’s effects in patients in the clinic. Lila says her team first is going to extend their approach to different food allergies, creating hypoallergenic food combinations for eggs and milk.