The Danger of Allergy Shaming 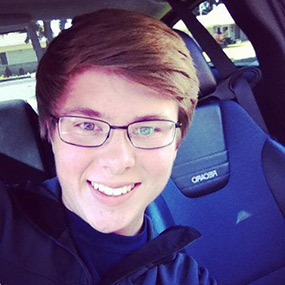 The Danger of ‘Allergy Shaming’

Could a teen’s desire to “fit in” with the crowd become life-threatening? Certainly, if they have a severe food allergy, researchers report. A recent study revealed that 54 percent of surveyed students with allergies said they purposefully ingested a potentially unsafe food, while 42 percent were willing to eat a food labeled that it “may contain” the problematic allergen. A 2009 study found that only 40 percent of college undergrads with food allergies avoided their known allergens. And sadly, a 2014 study of 251 families found that 32 percent of surveyed children said they’d been bullied because of their food allergy at least once.

Is the “trendiness” of food sensitivities a detriment to people with true, life-threatening food allergies?

Oakland University sophomore Chandler Swink was supposed to be having the time of his life in college. Instead, the 19-year-old, who had a severe peanut allergy, died after visiting a friend’s apartment where peanut butter cookies were baked and Swink likely came into contact with the cookies. Despite injecting himself with an EpiPen and driving himself to the hospital, Swink went into anaphylactic shock and experienced an asthma attack and cardiac arrest. He would never recover.

His mom Nancy told The Oakland Press that Swink either ate food that came in contact with the cookies or he came into contact with someone who was contaminated by peanut butter residue.

No one can blame Swink for wanting to hang out with his friends like any other college student, even though it was risky for him to be near peanut products. It’s a chance that many adolescents with food allergies take for several reasons: Risk-taking behaviors peak in adolescence, which means teens are more likely to take risks with their health. Add this to the fact that teen years are ripe with the desire to fit in. This makes teens more likely to be embarrassed about their food allergy and less likely to tell people they’re experiencing symptoms or ask questions about foods that may be unsafe, Scott H. Sicherer, MD, professor of pediatrics and a researcher at the Jaffe Food Allergy Institute at Icahn School of Medicine at Mount Sinai in New York, tells Yahoo Health.

Sicherer’s research shows that fatal food-allergic reactions are the most common among adolescents and young adults. The study revealed that 54 percent of students surveyed said they purposefully ingested a potentially unsafe food, while 42 percent were willing to eat a food labeled that it “may contain” the problematic allergen. A 2009 study found that only 40 percent of college undergrads with food allergies avoided their known allergens.

“They would rather make believe that they don’t have it,” Myron Zitt, MD, a practicing allergist and past president of the American College of Allergy, Asthma and Immunology, tells Yahoo Health. “It makes them appear different from everyone else. If everyone is having peanut butter cookies, they may have one because their buddies are. They may think they’re immortal or that they’ve outgrown it. But with regard to nuts and shellfish allergies, you don’t outgrow it.

It’s human nature to want to fit in. When you stand out, you’re more likely to get picked on—and that’s exactly what happens to many children and adolescents with food allergies, including Swink.

When Swink entered school as a child, his mom told The Oakland Press that school officials accommodated his allergy by making the district “peanut free” for him, but it came at a price: She said Swink was bullied for 12 years by both parents and students who blamed him for the peanut restrictions.

In general, the current attitude some people hold toward those with food allergies is a little cavalier, notes Zitt. Some may have become desensitized to how serious food allergies are since these days everyone seems to be coming out of the woodwork saying they have a food allergy, and it’s practically trendy to have a food sensitivity, such as to dairy or gluten.

Despite the prevalence, there is often a lack of tolerance and understanding about the dangers associated with a serious food allergy, which can result in “allergy shaming” or bullying. A 2014 study of 251 families found that 32 percent of surveyed children said they’d been bullied because of their food allergy at least once. Previous research shows that bullying puts kids at risk for anxiety, depression and thoughts of suicide. Understandably, compared with non-bullied children, bullied food-allergic children report higher anxiety levels and a lower quality of life.

Only half of the parents in the 2014 study knew that their child was being bullied over food allergies. On the flip side, children whose parents are aware of the bullying function better socially and emotionally. “When parents did something about the bullying beyond just talking to their child about it, the bullying decreased,” says Sicherer, who is also the author of “Food Allergies: A Complete Guide to Eating When Your Life Depends on It.” “The successful actions taken by parents mainly centered around intervening with the help of other adults, such as school personnel or, less frequently, the parents of the offending child.”

“They wanted someone to teach their peers,” says Sicherer. “They don’t want to be different. If other kids understand what it is, they feel less different. If your friends know and understand [your food allergy], they may be more likely to say, ‘Don’t just take that cookie’ or ‘You have hives — do you need epinephrine?’ It goes from embarrassment or danger to understanding.”