Help! My Child Is Bullied Because of Food Allergies 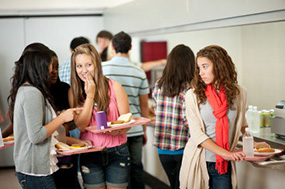 Help! My Child Is Bullied Because of Food Allergies

Intro
Following the article in last month’s newsletter about kids with allergies being bullied, here are some very helpful tips from parents and other experts if your child is facing this situation.

Allergies can be life-threatening – and a target for bullying. What to do if your kid is a victim.

As a first-grader, Jeremy Francoeur didn’t want to go to school, and his mom didn’t know why.

When she asked, he told her about a game his classmates made up called “allergen tag.” The premise?  Each kid pretended to be a food Jeremy is allergic to – an egg, a peanut or a shell fish, for example – and tried to tag him.

“If he touched them, they would cough and say, ‘OK, you’re dead, you’re out,’” says Jeremy's mom, Laurel Francoeur, an attorney in Woburn, Massachusetts, who focuses on food allergy advocacy. “He just felt very alienated from that.”

That wasn’t all. One classmate would sometimes lick Jeremy's sandwich. Another would throw it away. Both pranks left him hungry, since he couldn’t eat the school’s food. Even in middle school, a peer called Jeremy, now 14, a hypochondriac because he said he couldn’t eat the food at a school event. In reality, if he ate it, he could go into anaphylactic shock, a potentially-life threatening reaction usually involving swelling, hives and low blood pressure.

“When people hear ‘allergy,’ [they think] you’re just going to get a little rash,” Laurel Francoeur says. “They don’t understand that it’s life-threatening – that’s an issue that you always have to combat.”

One in every 13 children in the U.S. has a food allergy, according to the nonprofit Food Allergy Research & Education. That's about two students in every classroom, the organization points out. And that proportion is on the rise: Between 1997 and 2011, food allergies among children increased by about 50 percent, according to a 2013 Centers for Disease Control and Prevention study.

"Over the last five years, we've seen many infants and toddlers with food allergies, so over the next few years there will be many more children in middle school and grade school with food allergies," says Mark Holbreich​, an allergist in Indianapolis. "It's a problem that we need to be more aware of."

Bullying, which is common among children with allergies, only compounds the issue. In a 2011 study in the journal Pediatrics, nearly half of the ​251 food allergic kids reported being bullied, and nearly one-third were bullied because of their allergies.

The rate​ of children and adolescents bullied ​for any reason is around 17 to 34 percent, but it’s hard to pin down since there’s no universal definition for bullying, says one of the study’s authors, Eyal Shemesh​, an associate professor of pediatrics and psychiatry at the Icahn School of Medicine at Mount Sinai.

“It’s a higher rate than the general population, but that’s not surprising because they have a vulnerability,” Shemesh says. “It’s the nature of the beast.”

A Range of Consequences

But the ramifications may be more profound for children who are bullied about their food allergies than for those who are bullied for other reasons because the threats and bullying acts often involve the food the victim is allergic to. That means the bullying ​can actually be life-threatening, Shemesh says. “I think this is one thing that sets apart, to some extent, bullying of food-allergic people” from bullying of, say, overweight people, he says.

Kids who are bullied about their food allergies can also become especially anxious after an incident, in part because they may believe their lives are on the line.

For Samantha Goldfarb​, an 8-year-old in Brooklyn, New York, with a severe peanut allergy, that anxiety stems from a time in kindergarten when a classmate chewed a peanut butter cracker, spit it out and smeared it on her hair. “It just terrified my daughter,” says her mom, Jo Goldfarb​. “We’ve been dealing with it ever since.”

In the Pediatrics survey, Shemesh found that the more bullying a child experienced, the lower his or her quality of life.

That’s notable, he says, because improving quality of life – rather than, say, managing pain – ​is usually the goal for someone with a food allergy. “When you have a food allergy you don’t suffer most of the time … if you don’t eat the allergen,” Shemesh says. “As opposed to other illnesses, the morbidity involved in food allergy is really very much about quality of life and anxiety – it's not about the illness itself so much.”

What Can You Do?

On the up side, not all kids with allergies will suffer negative consequences from bullying. Some may hardly be affected, and others may actually grow from the experience.

In the latter case, “the child will learn to handle these things in a way that will be beneficial to him or her during their life as an adult,” says Shemesh, ​ who directs the EMPOWER (Enhancing, Managing, and Promoting Well-being and Resiliency) Program at Mount Sinai’s Jaffe Food Allergy Institute. The program helps children and their families cope with the emotional and behavioral side of allergies through consultations, referrals and group treatment.

Jeremy Francoeur, for one, has already gained some positive traits from his experiences with allergies. He’s more responsible and less impulsive than most other kids his age, his mom says. “He’s also very empathic,” she adds. “It’s given him a lot of empathy because he realizes what it’s like to be the odd man out.”

Here’s how you help your child with allergies thrive and fend off bullying:

Anna Medaris Miller is a Health + Wellness reporter at U.S. News. You can follow her on Twitter, connect with her on LinkedIn or email her at This email address is being protected from spambots. You need JavaScript enabled to view it..