Who is usually the first on the scene in any type of emergency? Law enforcement officials. It may come as a surprise to many that police officers are not allowed to administer epinephrine in an emergency, nor do they carry an EpiPen. New York State Senator Jim Tedisco is working to change this situation, since police officers now carry and administer Narcan for drug overdoses. It would be most helpful if you could email your state senator and representative to tell them of your support of Sen. Tedisco’s legislation, S.9153, to permit law enforcement officers to carry and administer EpiPens. 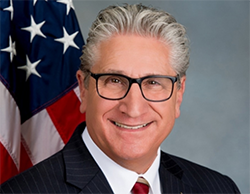 New York State Senator Jim Tedisco (R-Glenville) has called for legislation to close what he calls a “dangerous loophole” by adding law enforcement, who often are first to respond to emergencies, to the list of professionals who can treat people with life-threatening allergic reactions.

Tedisco wants to enable police officers and members of law enforcement to carry epinephrine auto-injector (EAI) devices to treat people in an emergency.

“When emergencies happen, seconds count. Our police officers are often the first on the scene when someone dials 911 due to a life-threatening allergic reaction, so it makes imminent sense to enable our highly-trained members of law enforcement the ability to carry EpiPens and help save lives,” Tedisco said. “I want to thank Sheriff (Michael) Zurlo and the Saratoga County Sheriff’s Office for their support for closing this dangerous loophole. I hope we can get this very important public safety legislation passed when the legislature returns to Albany and prevent a tragedy from occurring.”

“Life threatening allergic reactions can occur at any time. For those who are prepared and carry an EpiPen, they have the ability to treat themselves in a time of need. There are however, children and adults in our communities who have allergies that they may not yet be aware of or for one reason or another do not have access to an EpiPen. For them, a bee sting or a food allergy may require immediate intervention to save their life. Since equipping law enforcement officers with Narcan several years ago, countless lives have been saved from opioid overdoes. Allowing law enforcement officers to carry and administer EpiPens will further our ability to save lives through rapid intervention when it matters most,” Zurlo said.